It's no secret I basically want to embody old school. This usually means I try to get a coord shot that at lease vaguely looks like a street snap, as this is pretty easy. But if for some reason I can't get a photo outside, or I just feel like being a bit more adventurous, I like to mimic and take inspiration from old school photos. 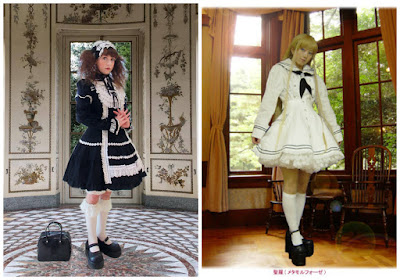 This first photo, I actually got taken inside a shopping mall, and I felt like the photo lacked something as it was. I'd been thinking a lot about this one girl who would always photoshop herself onto backgrounds of stately homes and nice gardens in her coord photos, and really wanted to try it out sometime. I decided that this was as good an opportunity as any, and so I gave it a go. 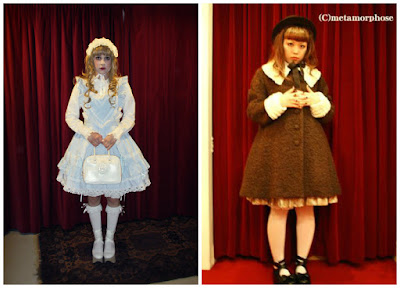 This one was kinda sorta a happy accident. We were only able to get our coord photos indoors, and the venue had red velvet curtains. I recalled a series of Metamorphose photos where the model is posing in front of a red velvet curtain in poor lighting, so in the end it worked out great~! 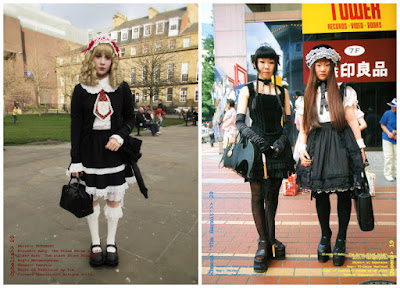 Here's a more general one. I tend to try and get street snap looking photos since it's the easiest, but every now and then I like to go full FRUiTS, and do an outfit rundown and even include a current obsession and point of fashion. I want to try and copy a Japanese outfit rundown from another publication next, since there are various types of street snaps in magazines.

For this photo, I applied a few filters with the general spirit of oldschool EGL photos, though I didn't have anything too specific I was copying. I sort of had a brand ad in mind. 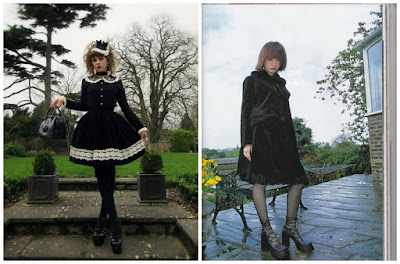 This shot was sort of inspired by various brand ads that tried to invoke that English country garden aesthetic, which worked in my favour since I was in an English country garden. In my head I associate that type of ad with Victorian Maiden the most, I think the one on the right is a VM ad.


After reading Lauran's old blog posts from her days in Harajuku in the early 2000s and seeing all her photos, as well as looking a little closer at the other old school photos I have, I'd really like to be even more adventurous with my coord photos in 2018. Hopefully I'll have some interesting photos to show for it by the end of the year~!
Posted by Angel Bruises at 20:22

Angel Bruises
I love all things Old School Lolita, so naturally that's what I want to talk about~